Design and Development of Resveratrol NLCs and their Role in Synaptic Transmission of Acetylcholine in C. elegans Model


Background: The damage of synapses and neurons leads to the cognitive impairment and this is the root cause of progression of Alzheimer’s disease. The nematode Caenorhabditis elegans is widely used as an in vivo model to study the synaptic transmission because of the relatively modest worm nervous system, which is like mammals.

Objective: The aim of this work is to assess the effectiveness of resveratrol-loaded nanostructured lipid carrier for the management of Alzheimer's disease.

Results: Formulations were characterized via particle size (155.08±3.28 nm), polydispersity index (PDI) (0.121), and zeta potential (-16.58). The entrapment efficiency was found to be 79.65±2.52% and cumulative percentage drug release was 63.54% up to 8 hours. Anticholinesterase inhibition competence was performed through Aldicarb assay. It was found that surge in the dose of RES-NLC caused an increased worm paralysis, which was credited to the accumulation of acetylcholine in synapses. Quantitative RT-PCR performed showed the effect of formulation on acetylcholinesterase (AChE) AChE 1 and AChE 2 genes. RES-NLC (dose 400 μg/ml) decreased the AChE 1 expression 3.23±0.13 fold whereas AChE 2 expression decreased 3.34±0.14 fold with the same dose. RES-NLC displayed transfer latency and escape latency of 27.50 ± 2.34 and 30.17 ± 2.82.

Conclusion: Based on the results, it was concluded that RES-NLC was effective in increasing acetylcholine concentration in synapses and thus in the treatment of Alzheimer's disease. 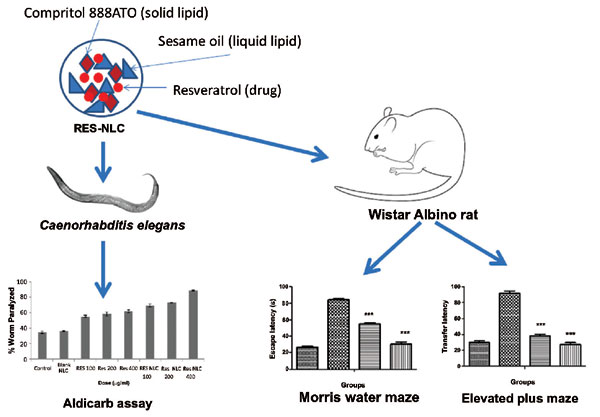