Background: Orodispersible film (ODF) is a novel drug delivery system and most widely used dosage form because of its convenience in terms of self-administration, compactness, and ease in manufacturing. Lutein (Carotenoid) is an antioxidant, belongs to class II (High permeability and Low solubility) under BCS classification. To enhance the solubility, a solid dispersion of Lutein was prepared and then it has been successfully fabricated into ODF to increase its pre-gastric absorption, reduce its first pass effect and avoid further degradation in gastric acid.

Objective: The objective of the present research work was to prepare a solid dispersion of Lutein in order to increase its solubility and formulate its ODF to improve its bioavailability.

Method: The solid dispersion of Lutein was prepared by a solvent evaporation method using Soluplus as a carrier. The orodispersible films of Lutein were prepared separately using different concentrations of Ethocel E 15 and Aerosil 200 pharma grade by a solvent casting method.

Conclusion: ODF of Lutein has been successfully formulated. The developed formulation can be used for the treatment of age-related macular degeneration. 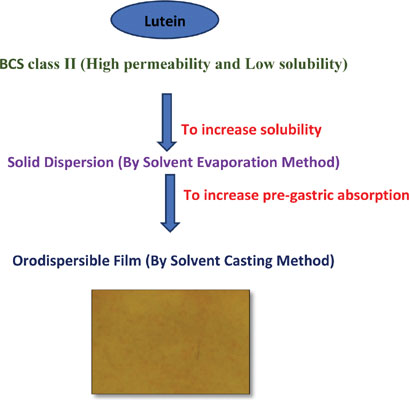