Background: Primary Parkinson syndrome is mostly treated by dopaminergic drugs, while the progression of the disease is not altered. Some non-dopaminergic are available, which are administered only after the Parkinsonian symptoms get worse.

Methods: In primary Parkinson syndrome, the altered activity of classical neurotransmitters and neuropeptides in the extrapyramidal system is summarized and up-dated. Anatomical studies on neural networks in the basal ganglia are mentioned. The direct, motor facilitatory pathway (D1 dopaminergic neurons) from the substantia nigra to the thalamus, via the internal globus pallidus, and the indirect, motor inhibitory pathway via D2 dopaminergic neurons have been considered. These established anatomical pathways have been brought in line with the neural interactions derived from neurotransmitter balances or imbalances. Besides, preclinical and clinical studies of effective non-dopaminergic anti-Parkinsonian drugs are reviewed. 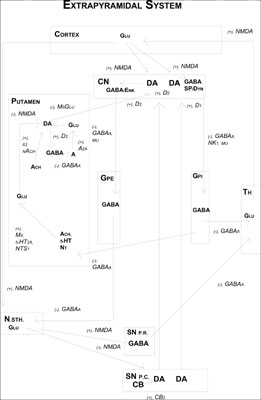