Preparation and Characterization of Freeze-dried Liposomes Loaded with Amphotericin B


Background: Amphotericin B (AmB) is a drug of choice in the therapy of systemic fungal infection because of its board-spectrum antifungal activity. However, its conventional formulation has many side effects such as acute and chronic nephrotoxicity. Liposomes have been developed to reduce the drug’s toxicity. However, they had to meet strict stability criteria. In general, liposomes can be freeze-dried to inhibit liposomes infusion, phospholipids degradation during storage. Liposomal size usually increases after freeze-drying because of being influenced by many factors in freezing, lyophilizing and rehydration processes. Therefore, cryoprotectants are used to stabilize liposomal vesicles during freeze-drying process.

Objective: In the present study, we developed AmB liposomal suspension and lyophilized liposomes loaded with AmB, evaluated the effect of different cryoprotectants on the characterization of freeze-dried AmB liposomes.

Conclusion: We have developed successfully AmB liposomal suspension and lyophilized liposomes loaded with AmB. Sucrose and trehalose can be used as cryoprotectants in the freeze-drying and reconstitution process. 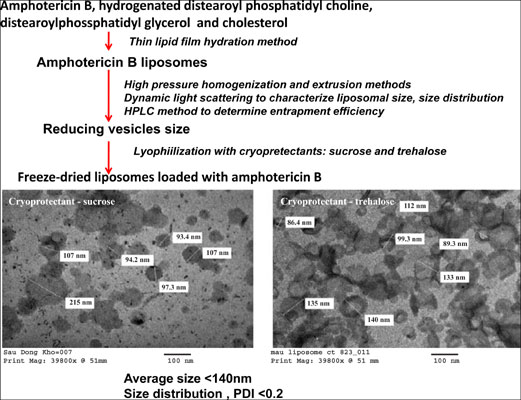