Background: Gliclazide (GLZ) belongs to the second-generation of sulphonylureas; it is a drug of choice for the management of type II DM. It belongs to BCS Class II. The major site of drug absorption for GLZ is the stomach; it displays variation in the drug absorption rate and bioavailability due to the shorter gastric retention time. The floating mechanism gets affected when the gastric fluid level is not sufficiently higher, which ultimately obstructs the floating behavior, which is the major limitation of reported formulations. This limitation can be overcome by folding the film into the capsule shell dissolved in the gastric fluid and the film swells/expands to dimensions higher than pylorus sphincter (12mm), thus preventing its evacuation.

Objective: The study aims to explore the floating mechanism in the design of films along with a tendency to expand by swelling and unfolding by utilizing a mixture of hydrophilic and hydrophobic polymer to achieve the controlled drug delivery and prolonged gastric retention of drug.

Results: The pre-formulation study established the purity and identification of a drug. FTIR study confirmed no drug excipient interaction. F3, F6, and F9 were optimized based on in vitro floating characteristics, swelling/expanding ability, and unfolding time. All developed formulations were unfolded within 14-22 min after capsule disintegration. The F3 was selected as the final formulation as its ability to control the release of the drug for 24 hrs followed by zero-order kinetics having super case 2 transport. XRD confirmed the amorphousness of the drug within the formulation. The stability study results revealed that the formulation was quite stable at extreme storage conditions.

Conclusion: The developed novel formulation has good potential for the effective management and treatment of diabetes mellitus. 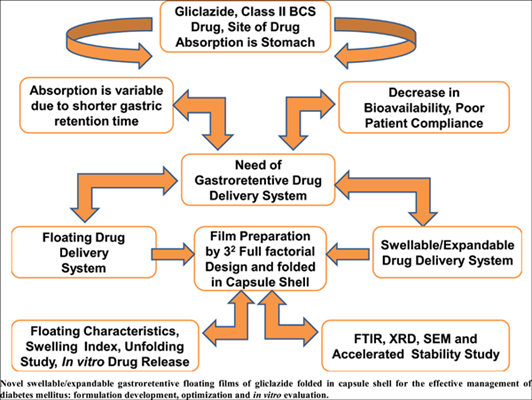