Objective: Since no approved drugs or vaccines currently exist for SARS-CoV-2 and its pathogenic mechanism is unknown, the present study aimed to explore and propose vmiRNA platforms as potential antiviral therapeutic agents against SARS-CoV-2. The development of antiviral drugs to target vmiRNAs may result in the down-regulation of viral virulence genes expression and suppression of viral proliferation.

Methods: In this study, to attain insight into the potential role of SARS-CoV-2-derived miRNAs in viral infections, a set of computational methods was used to scan the SARS-CoV-2 genome, eventually predicting 13 potential candidate vmiRNAs. Furthermore, the potential genes were predicted in the human hosts that were the target of these candidate vmiRNAs by applying the mirPath software.

Results: This study proposed a theory indicating that the predicted vmiRNAs might have a plausible role in altering human target gene expression, mainly contributing to a viral infectious state, inflammation, and immune system escape. These vmiRNAs might have therapeutic trends as antiviral agents against COVID-19 infection.

Conclusion: The findings offered a reference idea for a supplementary study on miRNA identification as a drug target and revealed the necessity to increase the understanding of SARS-CoV-2 genome structure for a better combat against the virus. 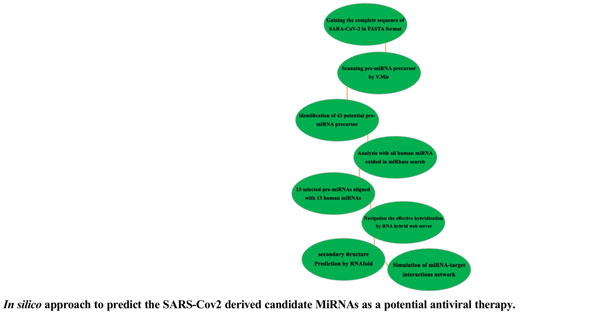